After a long, exhausting day, we were still on the road well past my midnight deadline. Mama had an afternoon appointment in Santa Clara (about a two-hour drive south across the Bay Area); after which, we visited her good friend Julie at her gorgeous downtown San Jose apartment. The two of them got a chance to catch up while I rested up for the drive home. Aren’t they adorable?

We watched the sun set out of Julie’s floor-to-ceiling living room windows. And then we enjoyed some delicious Caribbean takeout dinner with Julie and her daughter Rose, who is home from college in Denver. We got on the road late so we could avoid any traffic, though it was later than we’d even planned. 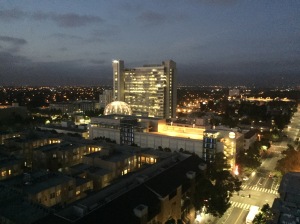 San Jose lit up at night from Julie’s place

Mama and I had some misadventures attempting to find a gas station and then a wrong turn attempting to resume the trip, but we kept awake by laughing while we recounted some of our most historic and hilarious travel misadventures. Also, singing. Oh yeah, it was epic. I’m not sure there’s anything better than singing your heart out with your Mama in the middle of the night as we cheered the appearance of each new county sign.

Yesterday’s #OneGoodThing was misadventures with Mama!

1 year ago today: Lazy Sunday in the sun

What was your #OneGoodThing today? Please share in the comments!

4 thoughts on “Misadventures with Mama”

This site uses Akismet to reduce spam. Learn how your comment data is processed.

Copyright © Gabriana Marks and Nosy Parker Blog, 2010-2019. All Rights Reserved. Unauthorized use and/or duplication of this material without express and written permission from this blog’s author and/or owner is strictly prohibited. Excerpts and links may be used, provided that full and clear credit is given to Gabriana Marks and NosyParkerBlog.wordpress.com with appropriate and specific direction to the original content.

Dementia, Caregiving and Life in General

The Aging of Aquarius
Confessions of a High School Teacher

Homesteading, homeschooling, gardening and baking with some geeky hobbies thrown in

Walk along with me

When life gives you cancer, make a punctuation pun. Life as a cancer thriver, by Jenessa Schwartz.

new york through my camera lens

"Don't be ashamed of your story it will inspire others!"

a prayerful & practical guide for manifesting a life you love & deserve!

living in stilettos
Venice from beyond the bridge

Because we belong to one place, we can love the rest of the world.

musings of a curious creative

Heart of the Matter

The Official Life of Jakob Martin